There are vast numbers of Kraftwerk fans out there and, thanks to a telephone system made of old baked bean tins and a computer server powered by a hamster in a wheel, most of them didn’t get a ticket for the group’s week-long series of gigs at the Tate Modern in London. Somebody who did was Channel 4 News anchor Jon Snow, who is pictured here with his 3-D goggles at the “Trans Europe Express” night. The shot was posted on Twitter by Channel 4 News journalist Jennifer Rigby.

You can read a review of the “Trans Europe Express” show, which saw Ralf Hutter and his buddies also playing material from “The Man Machine” and “Computerworld”, at the Facebook page for Electronic magazine. The first two paragraphs of the review are below. Click here for the rest and don’t forget to hit the “like” button on the page while you’re there. I am talking to you too, Mr Snow. If you’re into Kraftwerk, I guarantee you’ll be into Electronic.

As you may have noticed – you did notice, didn’t you? – I have neglected my blog for the last few months. It’s because I’ve been stupidly busy putting together a new magazine called Electronic. It’s the Special Secret Project I talked about back in May.

Electronic is now available at WHSmiths and all good newsagents throughout the UK. You can also order it online by clicking here. Underworld are on the cover, as I’m sure you’ve already spotted, and there are also articles on The Human League, Detroit techno, Can, Gary Numan, A Guy Called Gerald, Minimal Wave, Silver Apples and the BBC Radiophonic Workshop, plus a superb Kraftwerk interview from 1977. There’s a free CD too, featuring the likes of Cabaret Voltaire, OMD, Heaven 17, Devo, Ultrazox, Fad Gadget, The Normal and Yazoo. The magazine is published by Future (the makers of mags like Classic Rock and Prog) and at the moment we are just putting out a one-off pilot issue, but there will be more if the pilot sells well. 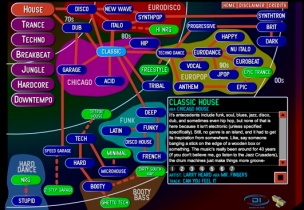 I can’t remember when I first discovered Ishkur’s Guide To Electronic Music but it was a good few years ago, so I am very pleased to have just come across it at the Digitally Imported online radio website. If you’ve not seen it before, Ishkur’s Guide is an interactive thingamabob illustrating the way that electronic music morphed into a million and one different genres and sub-genres in the 1980s and 1990s. It’s organised roughly chronologically and is highly entertaining as well as informative. If you have any interest in electronic music or dance music, there is absolutely no way you will find a better use for your mouse than clicking around this place. As interactive thingamabobs go, it really is one of the best.

Ishkur is a Canadian fella called Kenneth John Taylor, who apparently created the original Ishkur’s Guide in two weeks after telling a friend he could pigeonhole every electronic record in existence. That was in 2000. The most recent version (2.5) dates from 2005 and includes around five hours of sound files, including cuts by Kraftwerk, Giorgio Moroder and Throbbing Gristle, Chicago house and Detroit techno bigwigs such as Marshall Jefferson, Larry Heard and Juan Atkins, and examples of everything from speedbass and terrorcore to microhouse, illbient and liquid funk. You’ve never heard of any of those? Ah, that’s why you need Ishkur’s Guide, you see.

I particularly like Taylor’s funny, often barbed comments about a lot of the genres included on the guide. “I guess you could call this proto-trance – in much the same way a cow is proto-food,” he says of hi-NRG. His appraisal of 2-step garage begins “God, this stuff is so fucking boring”, while big beat is summarised as “The genre that finally made the homophobic frat house crowd accept that pussy electronic music at their Saturday night kegger parties”. Some trainspottery types have had a pop at Ishkur’s Guide for not always being entirely accurate and a few have suggested ways to improve it, but Taylor has responded to such criticisms by saying, “I’ll change it when I god damn feel like changing it”. Quite right too.