As you may have noticed – you did notice, didn’t you? – I have neglected my blog for the last few months. It’s because I’ve been stupidly busy putting together a new magazine called Electronic. It’s the Special Secret Project I talked about back in May.

Electronic is now available at WHSmiths and all good newsagents throughout the UK. You can also order it online by clicking here. Underworld are on the cover, as I’m sure you’ve already spotted, and there are also articles on The Human League, Detroit techno, Can, Gary Numan, A Guy Called Gerald, Minimal Wave, Silver Apples and the BBC Radiophonic Workshop, plus a superb Kraftwerk interview from 1977. There’s a free CD too, featuring the likes of Cabaret Voltaire, OMD, Heaven 17, Devo, Ultrazox, Fad Gadget, The Normal and Yazoo. The magazine is published by Future (the makers of mags like Classic Rock and Prog) and at the moment we are just putting out a one-off pilot issue, but there will be more if the pilot sells well.

Record Store Day 2012 is set for Saturday 21 April, with over 200 shops across the UK taking part in the annual celebration of all things round and black (although sometimes other colours) and with a hole in the middle. As in previous years, a number of exclusive releases are planned for the day and these will be available only from participating shops. The releases that have caught my eye include:

Click here to visit the Record Store Day website, where you can find out which shops are involved with the event and browse a complete list of this year’s exclusive releases. Now where did I put that 10 shillings record token I got from Auntie Sybil for my birthday…

You spin me round 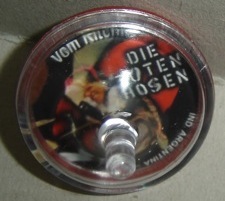 More Than Tazos is one of the oddest shops on Ebay. It’s based in Argentina and the bulk of its stock consists of hundreds of little plastic toys branded with the names and images of musicians. My favourites are the pinball games and the spinning tops. The advert description is the same for almost every item and it says: “These toys were made in Argentina. I found them in a shop – this kind of toy having been made in our country for a long time. They were used in many ways: Gumball and cereal premiums. Gifts for birthday parties. Funfair prizes and gifts at small circuses. (When I say “this kind of toy”, I mean plastic watches, medals, keyrings, etc).”

Now what I find especially strange about these things is the names they’re branded with. As mass market trinkets, free with your cereal or whatever, you’d expect them to be megastars, wouldn’t you? Well, there are a few Beatles, Michael Jackson and Elton John toys – but it is only a few. The vast majority of the names are decidedly special interest. There are Gene Loves Jezebel and Nina Hagen rings, for instance. There’s a Dead Can Dance pinball, a Devo noughts and crosses game, and an Alien Sex Fiend version of Ludo. The spinning tops feature individual musicians rather than groups and there’s a huge choice of these, including Wattie (The Exploited), Lee Kerslake (Uriah Heep), Billie Currie (Ultravox), Boz Burrell (Bad Company) and Nick Chown (The Bolshoi). So were all these people that big in Argentina, then?

As a small boy, I remember getting shriekingly excited over a series of clip-together plastic cartoon figures being given away with some breakfast cereal at the time. I pestered my poor mum to buy every box of this cereal in the supermarket because I still hadn’t got the Yogi Bear figure, which was the one I reeeaally wanted. I can’t imagine that, had I been a small Argentinian boy, I’d have run round the kitchen with my pants on my head at the possibility of finding a little spinning top bearing a picture of Vom Ritchie from Die Toten Hosen in my Sugar Puffs. I mean, Vom is a great drummer and all that, but he’s no Yogi Bear.