The lovely Stu Warwick has once again produced a terrific Christmas card for the Rat Scabies And The Holy Grail team. This year’s card, which we have sent to selected members of the Priory of Sion and a handful of our favourite Knights Templars, is a lovingly crafted black-and-white number featuring Rat Scabies, Richard Bellia and yours truly in a scene that’s a cross between “Indiana Jones And The Raiders Of The Lost Ark” and “Mighty Melons III” (a superior movie to both “Mighty Melons I” and “Mighty Melons II”, as I am sure you’ll all agree). And if you’re of a mind, you can see Stu’s card from last year here.

Right, I’d better get on. I have important grail business to attend to. I’ve also got a turkey to stuff. Merry Christmas everybody. Not too much fizzy pop now, you hear me?

Light the fuse on the shoes

Shall we have some Flipron? They’ve just brought out a new album, “Firework Shoes”, so we should, shouldn’t we?

I have been a big fan of Flipron since Rat Scabies played me some of the demo tracks they recorded at The Arch, his studio under Kew Bridge in London, way back in, oh, I guess it must around 1998, and I am amazed more people haven’t cottoned on to what a good band they are. Maybe “Firework Shoes” will do the trick. It’s produced by Rat and has Neville Staples, ex-The Specials and The Fun Boy Three, on a tune called “The Comet Returns”, which sounds like the theme music for “The Magnificent Seven” given the 2-Tone treatment. Ride ’em, rude boy.

Elsewhere, there’s all the musical weirdosity I’ve come to expect from Flipron. There’s psychedelic honky-tonk and fairground rock ‘n’ roll and kaleidoscopic avant-jazz and neo-bubblegum blues. There’s so much colour you’d think they were sponsored by Dulux. There are lots of darkly twisted tales and esoteric musings too, with frontman Jesse Budd out-Tim Burtoning even Tim Burton. “Available for weddings, trials and beheadings / Sporting occasions, autopsies, immolations / We’re low-life seeking elevation,” he sings at one point.

Anyway, we were going to have some Flipron, right? So if you would kindly press the little orange button below, we can listen to “The Big Red Button Must Never Ever Ever Be Pressed”. Lovely.

From a soul classic to a punk rarity

I love this gritty version of The O’Jays’ superb “Back Stabbers” by Soo Catwoman, one of the most famous faces of the early punk days. Soo was the cover star of the Sex Pistols’ Anarchy In The UK fanzine and her distinctive hairstyle was later copied by Keith Flint of The Prodigy. She’s backed on this 1998 cut by one-time Generation X, Empire and Westworld guitarist Derwood Andrews (who also crafted the video) and drummer turned grail hunter Rat Scabies. It was recorded at The Arch, Rat’s studio under Kew Bridge, and I believe I am right in saying it was the first time Soo had committed her vocals to tape. Although the track wasn’t released back then, it’s now available as a download at CD Baby. Click here for Soo Catwoman’s CD Baby artist page and here for her website, where you’ll find some great merchandising on the store page. 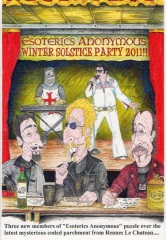 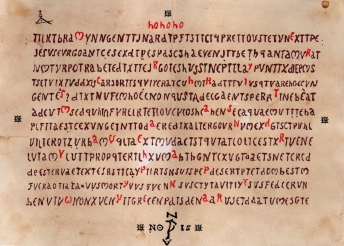 Did I mention I’d written a book called Rat Scabies And The Holy Grail? I believe I did. It’s very good, you know. It’s about what the title says it’s about – punk rock legend Rat Scabies and me on a mind-bending (and probably soul-bending) hunt to find ye olde mystic and elusive Holy Grail – and you can read a couple of extracts here. Go on. You know you want to.

Several of the episodes described in Rat Scabies And The Holy Grail have been turned into cartoons by our arty friend Stu Warwick, some of which Stu has published as limited edition prints and auctioned off for charity (lovely bloke that he is). Each year since the book came out, Stu has also produced a small run of Christmas cards for Rat and me – and his 2011 card is my favourite to date. The front shows Rat and me with photographer Richard Bellia, who occasionally joined us on our questing (that’s a technical term us grail hunters use), and the inside has a secret message hidden in Stu’s specially adapted version of one of the coded parchments from Rennes-le-Chateau in France, a place which features heavily in the book. Click the images to see them nice and big and readable.

On this seasonal note, that’s about it from me for a couple of weeks. Have a great Christmas. I’ll start posting again when I’m able to extricate myself from the armchair.