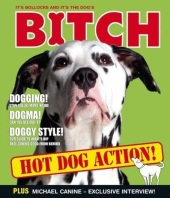 I’m working on a Special Secret Project with Mark Wernham. I’d love to tell you all about it, but I can’t. It’s a secret, innit. For the initial stages, we’ve been helped by Steve Appleton and Paul Thompson, for which we’re extremely grateful. Paul’s name isn’t a link because he doesn’t have a website because he thinks he lives in 1942 because he’s round the fucking twist.

I’ve worked with Mark, Steve and Paul many times in the past. Our first Special Secret Project was a book called Pussy – For Cats That Should Know Better, which was a spoof of lad’s magazines like Loaded and Nuts. It was published by Bantam Press in 2004 and it sold quite well, at one point managing to scrape into the Amazon Top 100. Our next Special Secret Project was Bitch – It’s Bollocks And It’s The Dog’s, a follow-up to Pussy, which sold pretty well too. Another of our Special Secret Projects was an utterly genius idea for a book called The Victorian Gentleman’s Guide To Group Sex. That was roundly rejected by every publisher in the known universe.

Our latest Special Secret Project is not a book, as it goes, but I’m obviously hoping it ends up doing a Pussy rather than a Victorian Gentleman’s Guide To Group Sex, if you get my drift. I am also hoping that, having tagged this post with the words “Pussy” and “Group Sex”, I get a big uplift in the number of visitors to my blog. 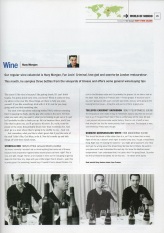 Way back when, I was the editor of a magazine called Mondo. It wasn’t around too long (2000 and 2001), which was a pity because I think we had some corking editorial ideas. But then I guess I would say that. Anyway, one of our regular features was Huey’s Wine Column – a wine column by Huey Morgan of the Fun Lovin’ Criminals, who’s now maybe best known in the UK for his shows on BBC Radio 2 and Radio 6 Music. Huey didn’t pen his column himself, mind. It was ghost written by Mondo deputy editor Mark Wernham, who would fill a big box with bottles of wine, grab the office tape recorder, and meet with Huey at some secret location every month. That was generally the last we’d hear from Mark for a couple of days.

I’ve seen mentions of Huey’s Wine Column in lots of different places over the years (it’s on Huey’s Wikipedia page), but the copy has never been re-published anywhere (either in print or online). Not to my knowledge or Mark’s knowledge anyhow. So here, for your delectation and your delight, are scans of Huey’s first three Mondo wine columns, as they appeared in the magazine. Click an image for a large, readable version. Huey’s views are very entertaining, but you’ll find lots of useful tips too. I mean, when he says “Don’t drink wine with shit swimming around in it”, you’ve got to admit that’s sound advice.