Anarchy in the ukulele 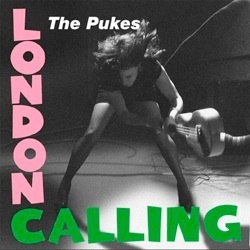 There’s only three weeks until Christmas and if you’re still wondering what to get the punk in your life, the answer may lie with The Pukes. I’m not talking about some obscure group from 1977 with a solitary crackly seven-inch to their name. The Pukes are about as here and now as you can get. Well, kinda. They are a self-proclaimed “anti-society” of 10 ladies, some of whom have had several 21st birthdays, who perform classic punk songs on ukuleles. Which is a marvellous concept – and all the more so since they play with considerable skill and a big bucketful of gusto.

I’ve got to say that I’m buying pretty much whatever The Pukes are selling. And right now, as well as dusty old ditties rattled and twanged from teeny-weeny stringed instruments, the ladies are selling a 2012 calendar featuring their interpretations of 12 iconic punk record sleeves. Should you need telling, the revamped creations above are The Damned’s “Damned Damned Damned” and The Clash’s “London Calling” (yup, that’s a ukelele being trashed on “London Calling”), and others in the set include Blondie’s “Parallel Lines”, X-Ray Spex’s “Germ Free Adolescents” and the first Ramones album. The images have been put together by photographer Diana More and designer Lorna Tiefholz, who is herself a Puke.

The Pukes’ calendar is A3, printed on glossy art paper, and will set you back a freshly ironed tenner (plus postage). You can order it by clicking here. You can also see the covers on display at Filthy MacNasty’s in Islington, London, until 17 December, and then at Norwich Arts Centre from 6 to 30 January next year. Watch out for the sweetcorn and the bits of carrot. 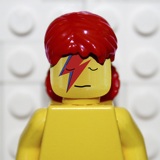 If you haven’t seen the Lego Album Covers group on Flickr, you really are missing a treat. There are over 250 images in the group and only one or two duff efforts among them. I especially like the work of Aaron Savage, who’s responsible for the three superb examples above – David Bowie’s “Aladdin Sane”, Blondie’s “Parallel Lines” and Grace Jones’s “Island Life”. You can see a slideshow of Aaron’s Lego album covers at his website, Savage Arrow, where you’ll also find a number of other inventive photographic and design creations.